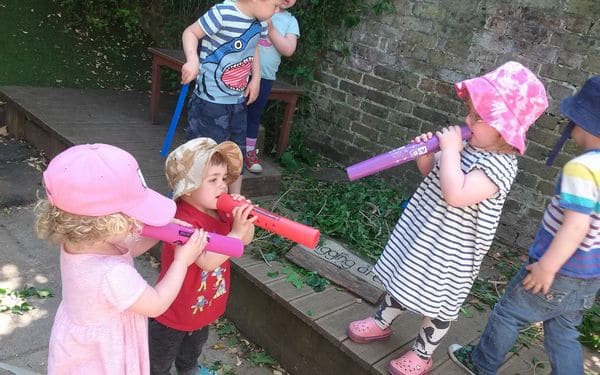 Text to be completed….

X-factor here we come! The Chimps have been gurgling, warbling, and shouting out their favourite sounds into their role play paper microphones and have had a wonderful time doing it.

This week the Howlers have been learning all about the weather. A topic that’s always more fun when you can go outside and roll around in it. They particularly enjoyed saying “sunny.” In the sensory tray they got up to a slippery foamy mess as they explored shaving foam, bubbles, and ice. Some of the Howlers played an impromptu, and rather quirky, round of ice hockey as they slid the ice across the tray to their friends. At the creative table, the children enjoyed vegetable stamping and bubble wrap painting. Reusing all those bottle lids we accumulate in the week, the Howlers had their pick of multiple sizes and colours and created cloud dough (flour and oil) molds. They also created their own sensory playdough, adding materials of their choosing (sticks, pebbles, shells, etc.). Their cooking activity was raisin and oat muffins which went down an absolute treat. Like to the point of tears for more. Oh dear. To work out those little legs, and coordination, the Howlers went on an island hopping expedition and had to hop from each of their islands to the next one. Might I suggest a boat next time?
Baboons – If you had a medical emergency this week, the Baboon room was the place to be as the Baboons donned their doctor’s jackets and nurse aprons and tended to the wounded and poorly. There was magic cream for rashes and stethoscopes for those funny heartbeats. As there are quite a few children potty training at the moment, group and book times were focused on stories about the potty. By the end, all the children were very keen to use the potty…with varied success. In the writing and mark making area the children practiced their scissor fingers as they cut shapes out of magazines. There’s no better time of the year to hula-hoop than in the warm sunshine and the Baboons wiggle their way through the hoops and even attempted a few hula tricks. As the weather was so nice, a few of the children took a trip to the beach (with adults because it would irresponsible, otherwise) to collect some stones for some of our inset day resources. In the small world tray, the Baboons have been designing a junk modelling city and creating brick prints for the walls. Persona doll Mike stopped by this week to share with the Baboons some of his favourite toys which resulted in a very exuberant conversation about the Baboons’ own favourites including the timeless, rubber ducky.

The older Gorillas are fast approaching the big school transition and this week some of them have been writing in their “school books,” tracing letters and practicing the ‘s’ sound. Speaking of phonics, the children have been matching objects with their initial phonic sound for their sounds and letters activity. Macchina, treno, and motorino