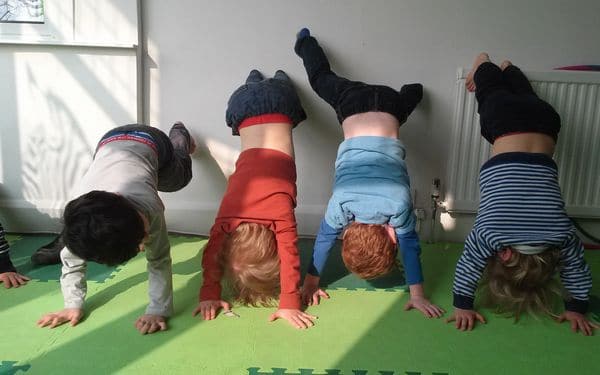 The chimps were off to the farm in the small world area this week and it was quite the sensory experience. Pigs were in the mud, sheep were on the grass, and some of the poor antlered small world animals became horses as their antlers had magically disappeared. When the Chimps weren’t visiting the barn they were trudging through spaghetti-hay with their tractors. For their mark making activity they have been exploring the wonders of tea bag printing. It didn’t take long for them to rip those soggy sachets open and have a good scatter of the contents. The physical activity this week took advantage of our slightly warmer sunny spells and involved some cooperative play as the little ones rolled different sized balls to each other in the garden. They also had a wonderful time, as the ground wasn’t wet, exploring all areas of the garden and playing a bit of peek-a-boo with the Baboons in their conservatory. In the group time area there has been a mix of hard and soft toys in the discovery bags and some of the Chimps noticed just how much more satisfying it was to squeeze soft toys than hard ones. Also very satisfying were the dulcet tones of Carly and the gang singing the song of the week “Twinkle, Twinkle Little Star.” The Chimps even made starry wands to point with (and occasionally chew on). In celebration of St. Patrick’s Day the Chimps enjoyed making rainbow oats and sticking four leaf clovers on their glittery cards.

This week the Howlers got their car back from the Gorillas. They changed its guise and off they want on a fire rescuing adventure in their freshly painted fire engine! The sieves and colanders have been out in the sand tray and the Howlers have been finding all manner of strange objects. Some decided to put objects inside empty toilet rolls and try to keep them inside as they added sand and we can only admire those innovative investigation skills. Piggy backing from last week’s successful Mother’s Day bath salts, the Howlers made fizzy bath bombs to chuck into the garden water trays. Then it was time to fish out all the rose petals as they watched them dissolve. For group time the children have been talking about using ‘gentle hands’ and learning Makaton for “sorry.” They’ve also learned “wait” as they used the Makaton to support turn taking and transitions. Obviously recognizing the theme of playing nicely with others, the Howlers really got the hang of turn taking and co-operative play at the chalkboard this week. A few of the Howlers played a mark making game as they passed the chalk to each other to make marks. Never ones to shy away from a good party, the dance room was the venue for a glow-rious (you’ll see in a second) music and movement session with glow sticks. I know I know. I just couldn’t help myself.

As the staffroom now boasts an assortment of reading material the Baboon team thought the children might like to have a go at being fashionistas using clothes from ‘fashion’ magazines. The children cut out the outfits they wanted to create their own spring look for their seasonal display board, stuck them on lollipops and added their faces. Your children now all have a paper version of themselves and they are all quite proud of their choices. Green was the thing on Tuesday for St. Patrick’s so the baboons measured out their own ingredients for their clover-themed play dough. Using scissors they cut out shapes, created swirling patterns and “green snails.” At the creative table the Baboons made potato printed four leaf clovers and enjoyed repeating their patterns to create big flowers. In the mark making area the children have been learning how to use rulers to create super straight lines and a few of the Baboons have even been attempting to make triangles! On the subject of shapes, the Baboons made up a song for all the shapes they could see in the room for their group time activity. For music and movement the children watched some videos of traditional Irish dancing and had a go themselves. Apologies to the Howlers for the noise – there was some very exuberant footwork going on.

Thunderbirds are go! They’re probably most definitely all too young for Thunderbird references but it’s been all about superheroes this week in the Gorillas and their many guises including all our beloved princesses. The children spent time establishing the rules of superheroes which is a great opportunity to encourage and support positive behaviour as the gorillas have a solid understanding of the things that make their heroes super. They also made their own superheroes junk model style in the creative area. In the garden, their exercises were fit for the Avengers as they climbed, stomped, sprinted and jumped really high because we are still working on that flying thing. Speaking of flying, the gorillas learned about the superheroes of the natural world as they explored all the amazing powers of insects and creatures as well as the ones they meet every day like teachers, policemen and women, and doctors. It’s not all been kryptonite and bat caves though. Eboné led a few mad scientists in a colour odyssey that reeked of vinegar. Armed with test tubes, pipettes, gloves, and colour mixing cards, the children made erupting purples and greens (vinegar and bicarbonate of soda) and lava-lampy blues and reds (food colouring, oil, and water). There was even some talk of density as some of the gorillas noticed that their mixtures had layered. At story time, Irene prompted the children with simply the start of a wonderful tale: “Once upon a time, a pancake escaped….” It was then the gorillas’ time to shine as all the children created scene after scene for this runaway pancake. Whatever will they think of next?