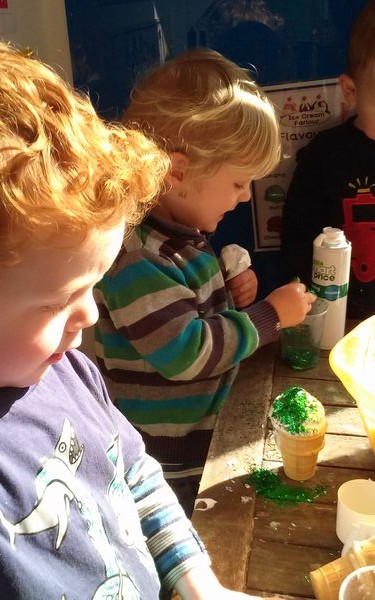 Our rather wonderful youngest ones, this week, have been using multi-coloured feathers to do ‘bird collages’. They had dinosaurs out in small world but they basically went wherever they chose and spent quite a lot of time roaring away at the snack table. They splashed around with coloured water and painted with bugs (pretend). They practiced the pony puzzle until it was perfected and they swept their mini brooms around to very messy effect in their builder’s tray – in fact anyone that went in that room basically came out looking like Jack Frost. The team used the brooms to good effect actually – they used them to encourage free standing as they children swept away and (kind of) made the place a bit tidier at the same time. They used Makaton to create a visual ‘Sleeping Bunnies’ game and went to the park where they had a great time on the little slide.

Our Howlers practiced naming shapes this week and did some rather effective paintings with tooth brushes. They had a teddy bear’s picnic out for their role play and those teddies were treated like kings and queens. They had a doctor’s surgery complete with stethoscopes and blood pressure takers (sorry to any doctors out there for the lack of correct terminology), bandages and outfits. They made lots of lovely patterns with sticks in wet sand and they had a few rather good sessions of musical statues. The Howlers played with the selection of keyboards and they used the binoculars to spy on passers-by and other things around the nursery.

The Baboons had a rather amazing ice cream parlour for their role play this week. Their imaginative and interactive role play ideas really are a wonder and they had a fantastic time as ever. They made shaving foam ice creams in cones of all different colours to signify the different flavours. They too played with the keyboards and they had picnic dolls house equipment out and acted out picnic country scenes. They did tracing pictures with tracing paper which they were rather good at. They used cards with different pictures of different movements to copy in music and movement and they also did a very exertive game of ‘Tug of War’. They went to both the beach and the park this week as the weather was so lovely.

Our Gorillas compared and contrasted each other’s features in a few very eloquent circle times this week. They went to the beach and made stacks of pebbles and practiced this at nursery too. They mixed paints the colours of the entire rainbow and made rainbow hand prints whilst singing the rainbow song. They had the train track out this week and were encouraged to practice directional words like ‘along’ and ‘through’ and ‘under’ and ‘long’ and ‘short’ etc. Clever. They read a story called ‘Olivia! I’m not reading!’ and then remembered the story and ‘read’ it to each other. They had a campsite for their role play this week and made a campfire, had night time meals, collected sticks and really immersed themselves and imagined what camping is like. They played ‘Phonics Bumps’ and they went to the park and the beach on different occasions in the sunshine. They did puffy paint pictures (must have been talking to Ebone who rather likes that kind of thing), made their own play dough and practiced their numbers with number flash cards. Phew. Oh, and they had their Italian lessons twice this week – we have some lovely videos which we will put on the website next week so you can see how amazing your Gorillas are at the Italian language!

The children will have their beloved garden back on Monday. We are all excited about seeing them out there again having a lovely time. Thank you again to all of you for understanding – we will take lots of pictures so you get to see them enjoying their outside space again!