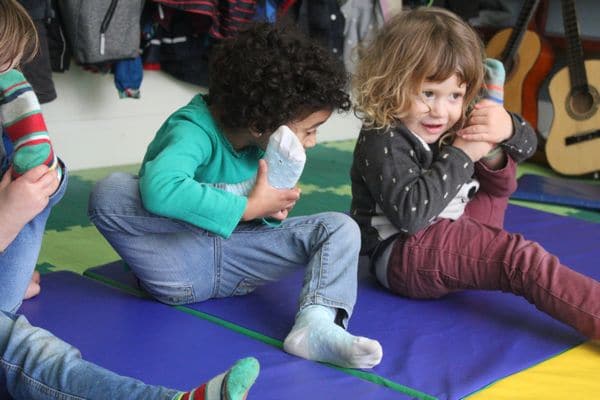 Holi Festival (Hindu) was this week and the Gibbons have been getting stuck into celebrating it by throwing paint onto large sheets pf paper and create big splashes of colour – similar to where it is celebrated in India and Nepal. Glue was then added to hold the paint on there. Later the Gibbons added water to their paintbrushes and created swirls of colour on the sheets and made some amazing colourful patterns all for Holi Festival. The Gibbons also used their painting skills to do vegetable printing using carrots and various other vegetables. In the Gibbons Small World area they made a rather realistic dinosaur land filled with sand, stone and hay. They played with the dinosaur’s and practised their best dinosaurs sounds moving their dinosaurs around the different terrains. Your little Gibbons also made their own fruit salad for desert out of bananas, pears and grapes and squeezed lemon over the top – yummy. Don’t forget to try making our recipes and send us your pictures – ones without children’s faces we will add to our Facebook page.

Rojo, Rosado, Verde…our Baboons have been learning the words for colours in Spanish and having great fun doing it. They have been recognising the different colours in the room and saying them in English and then learning the words in Spanish. They made their own little version of the allotment in their Small World area and made some fantastic bird feeders. They talked about the bug hotel up at the big Allotment and what bugs they would like to come and visit. Joining in in the theme of the Holi festival, the Baboons have making transient art in the garden. They painted with lots of different colours and made explosions of bright colours to reflect the Holi Festival. With Easter just around the corner (and that means EASTER EGGSSSS) your Baboons have been getting ready and making their own Easter eggs with cornflour glue to make the moulding. Once set and dry they decorated them with different colours making different patterns on the eggs they had created. Our Baboons had a go at Yoga this week, and practised balancing and stretching and learning some of the typical yoga moves. They all did very well (better than our adults) and demonstrated some great balanced moves. Namaste!

This week, for Indian Holi festival, the Gorillas have been getting involved and learning all about the  festival. They have been splashing paint and mixing the paint to make all different colours and painting with their fingers to make all different patterns. Carrying on with the Holi festival theme this week, the Gorilla team showed the children various videos and spoke about what Holi is all about. They learned about how it is festival of colour and light and enjoyed seeing the different pictures of their traditional clothes they would wear. In Small World, the Gorillas played with the gingerbread house Alex built (sounds like another tale we all know!), and made little roads that led cars and characters up to the house. Alex’s house was much praised during our recent staff meeting – we love how the team get involved in making things for Small World and we reckon they need more recognition for doing so!). Using the Gorillas amazing imagination, they made up different stories about the house and who lived there. In the Reggio Emilia area, the Gorillas made stories with wool puppets and made drawings of them. They enjoyed sorting the wool in to colour groups and playing with the wool. The Gorillas have been making their own collages with cut out pictures and words from magazines and recycled objects they found. They experimented with different shaped scissors and used them to make different shapes on their cut outs. A classic game of balancing wooden blocks and playing jenga in the Gorilla room caused a lot of fun and noise this week. The Gorillas tried hard to keep the towers together without it toppling over however sometimes this was easier said than done! Finally, with school only around the corner for some of our Gorillas, they have been doing amazing recognising their letters with sounds – we are very proud of them as they are all coming along great. At different rates of course, but brilliantly nevertheless. The Gorillas are now able to recognise various letters when shown by one of the Gorillas team members. Well done!

Thats our motto! Making sure we have the right clothing on hand is vital to being outdoors more. The children need to be super comfortable, warm and dry to be able to enjoy the outdoors at any time! #YoungFriendsNurseryHove

As the garden grows so do the amount of places the

The older children love to assist the younger ones