Having Fun Whatever The Weather (Week beginning 3rd Feb 2014)… 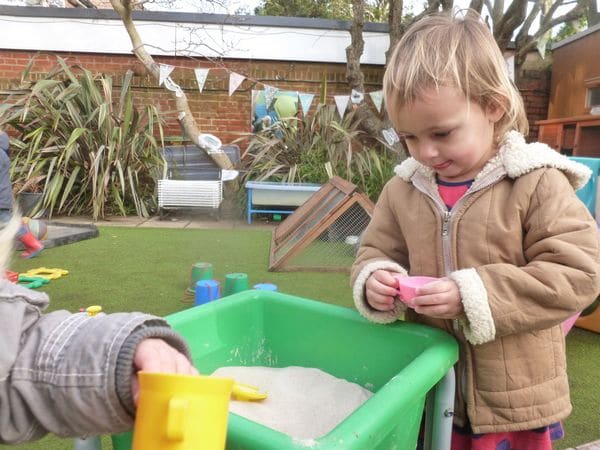 Having Fun Whatever The Weather (Week beginning 3rd Feb 2014)…

Our lovely little Chimps have been making fabulous sensory squidgy bags with sealed bags, glittery sequins and colourful buttons. They had great fun with them. The Chimp team (Maria and Carly and Amber) made a really lovely Makaton board showing all the Makaton signs the babies are learning at the moment. They are really using them well (the children that is) – so very clever. They had a fantastic sensory light up circus tent this week to that not only the Chimps adored – quite a few of the other children tried to sneak a play in it on their way past! They shook all sorts of shakers whilst singing lots of their favourite songs too. They squirted shaving foam on the table and dropped lots of colours into it with food colouring and swirled away to their hearts content making beautiful patterns and rubbing the smooth foam all up their little arms. They also swirled and scooped corn flour, with its stiff and strange texture with spoons and other implements in their sand tray.

Our lovely Howlers made tasty fruit kebabs. It’s actually a wonder how any fruit made it to the sticks as they were munching away as fast as they were carefully popping the pieces onto sticks. They also did more cooking in the form of tasty potato boats. They squealed away having lots of fun whilst playing games with balls and our parachute and they made a right racquet playing our musical instruments. They hid and found and arranged patterns with all sorts of shells in wet sand and they pretended to use the computer and phones and write notes with their office role play corner. They made tracks for the trucks outside in the garden which they loved. They too played with shaving foam and different colours and they spent lots of ‘down time’ fixated with their sensory board and sensory bottles.

Our beautiful Baboons played a rather innovative and fun game searching for aliens in the garden. They searched for moon rocks in our moon sand too (the Baboon theme is starting to become obvious). They made their own play dough and rolled it and cut out lots of different shapes and got covered in flour. They had lots (and we mean lots) of planes out with the garages and roads (runways for this purpose) and it made a nice change from cars. They played space music (if they have music in space?) in music and movement and moved as they saw fit. They also started to learn the Makaton alphabet.

The grown up Gorillas had a massive construction site with all manner of related stuff for them to become totally immersed – and they definitely did. They dressed up as builders, made a lot of walls and banged away with hammers. Today the site turned into a campfire zone with lots of driftwood – not really related but they had a ball nevertheless. They made sand castles and cakes with sand with cups and buckets and they practiced recognising and tracing over their own names and copying letters onto big sheets of paper. They also made their own puzzles which was quite clever of them – they drew pictures on card board, but them into pieces and put them back together to make a puzzle! They also of course had their rather brilliant Italian lessons, this time with Maria and they learned how to sing ‘Good Morning’ song in Italian. They are really loving those lessons!