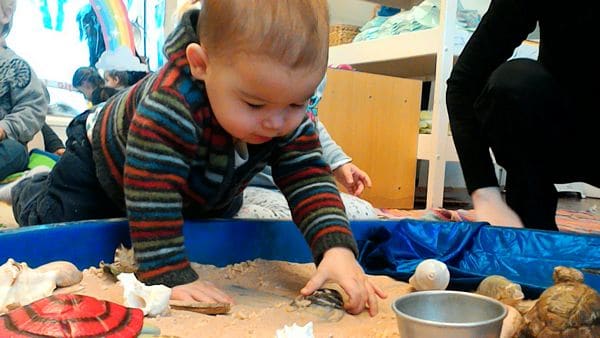 The Gibbons have been very busy in the kitchen this week. They have been exploring the textures of food and even mashed their own boiled potatoes and vegetables and ate them for tea! Things turned a little creative when they decided to use their mashers, forks and spatulas to make marks on paper using colourful paints, not to mention the leaf soup which they made using leaves, sticks, rice and water. Fortunately, they didn’t eat that for tea.  To counterbalance all of this eating of scrumptious meals, the Gibbons did a spot of ribbon dancing. Using their ribbons, they shook them up and down and round and round, and even copied actions to some exciting music. Just when they thought they had ran out of energy, they managed to pull through, and crawl through tunnels made from chairs and sheets. They practiced crawling fast and slow, forwards and even backwards! We are all dizzy just thinking about it.

Yoga under the sea? This week the Baboons have been learning the ‘under the sea’ story, and searching for dolphins whilst stretching and breathing their way through their Yoga class. But the sandy fun didn’t end there.  In the Baboons room this week, there has been a light box with sand on it that the children have used sticks and paintbrushes to engrave marks and shapes. They have even played with dripping wet sand and scooped it from each tray and into the containers using spoons. The Baboons learnt how to use the cassette player and played their favourite stories and danced to their favourite songs. During heuristic play, the children explored costume jewellery, fabrics, beads, CD’s and practiced filling and emptying containers. I think it’s safe to say that this week, the Baboons have had a whale of a time.

This week, the Gorillas utilised their culinary skills in the toy kitchen. They mixed, stirred and poured using different sized bowls to make tasty pasta soup and pasta bake. They even made ‘medicine’ to make them feel better – we cannot confirm whether or not this was because of their cooking. Once they were feeling better, the Gorillas created and became their favourite animals. Using paper plates, paints and tissue paper, they made animal masks and acted out animalistic movements, spoke about their habitats, and what they eat. Using whiteboards and pens, the children have been copying words from the ‘Biff and Chip book’ collection, and with a little help, some managed to sound out each letter and read some three lettered words. The Gorillas have also been spelling the phonics out and were able to match specific phonics with the phonic books, sheets and alphabet. Well done Gorillas!

On Thursday, the Gorillas all put their print on the allotment. Using paint, they each pressed their hands onto the labelled wooden planks that are soon to be paced next to their vegetables. They look amazing

Bugs Bugs Bugs! 🕷️ We love to investigate the garden and allotment for bugs, then identify them with our books.

We have lots of books on local insects so the children feel excited and happy when they can find the right match for the insect they have found! 🐜

Bugs Bugs Bugs! We love to investigate the garden and allotment for bugs, then identify them with our books. We have lots of books on local insects so the children feel excited and happy when they can find the right match for the insect they have found! #YoungFriendsNurseryHove

Bugs Bugs Bugs! 🕷️ We love to investigate the

We repurposed this building architrave into a fun

To encourage our children to develop independence

This is our new pathway we're putting into the all

Now we have our beach and forest school teacher we

How fun does this look! Here we were playing with