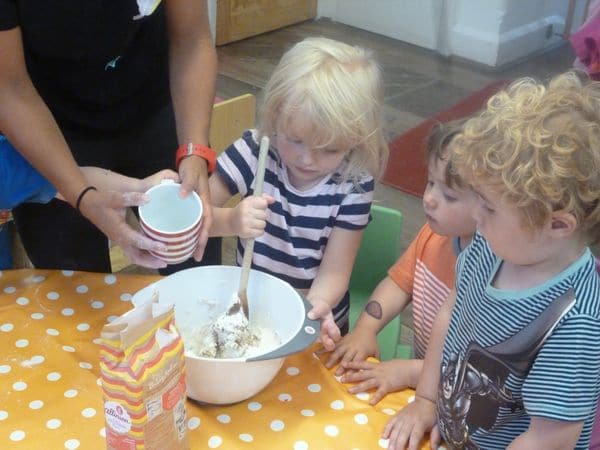 Well we have certainly kicked off the month of July with a bang at Young Friends. There’s been sports relays, oodles of healthy cooking, wonderful artwork and days full of fun and giggles. Each age group also got their glitter and glue out to make some super sparkly ‘Independence Day’ firework pictures. Here’s a rundown of some of the magical things the children have been up to throughout the nursery this week….

The Gorillas have been culinary geniuses this week. Every day they have come together around their main table and worked incredibly hard to create their very own individual pizzas. They measured, poured and mixed all of the ingredients for the dough and topped them off with their own choice of toppings. They have also been very creative this week by cutting up different pictures from magazines and using them to make story telling collages. In the garden the children made full use of our great array of sports equipment with running relays and lots of fun ball games. They have also been busy checking on all of their previously planted fruit and veg by watering them and checking their progress. Back in the room, the lucky children watched a short Spanish documentary about deep sea creatures which they found fascinating. They have also been reading stories and learning the names of the weird and wonderful creatures they saw. On top of all of this they have even found time to trace our wooden letters , finding the special letters from their own names.

There’s been so much going on in the Baboon room to tell you about this week. There were two main activities for the children to get stuck into…. Each morning they made really delicious healthy fruit smoothies for which the children cut up, mashed and sorted all kinds of tasty fruit and enjoyed the results for snack. They also made some fantastic artwork using paint in spray bottles to squirt all over their paper. Around the room the Baboons were writing, answering phones and typing emails in their office role play and practicing their fine motor skills with threading beads. During group times they continued to practice their amazing new phonic skills, talked about the time on their ‘What’s the Time Mr Wolf’ book and even had a go at drawing o real IPAD.

The Howlers have been busy playing their brilliant builders workshop this week. They’ve worn hard hats and high-vis vests and had all sorts of tools to build and fix with. The little ones have also had lots of other building equipment out in the room with mega blocks, stacking cups and wooden blocks and have made building and toppling nonstop. On the round table the children have continued making some fascinating new sensory bottles and rolled different size balls to each other across the table. Aside from all of that, the Howlers have been copying the adults at music and movement time with Simon Says games, used their train set in the small world area and used glue and coloured sequins to make some lovely pictures for their families.

A Little Bit of Housework:

The Chimps have been practicing their fine and gross motor skills with their very own home corner role play this week. They have been using irons, opening and shutting washing machine doors, using food resources and putting babies to sleep. There’s been loads of interactive toys round the room with all sorts of objects to stick and pull off the walls and the little ones have loved finding their own family pictures on the walls. At group time the Chimps have focused on music and sound with a mixture of big and small instruments for exploring, banging and blowing. The messy area has been full of coliur this week with the children painting pasta bright red for making necklaces and exploring glitter jelly which the Chimps absolutely loved.