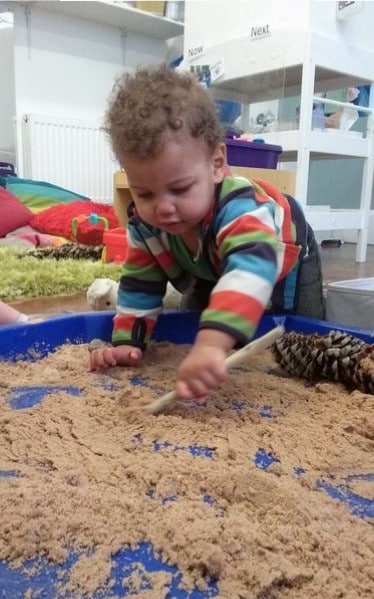 It’s all been rather cool in the Gibbons rooms this week as their theme was winter and the Arctic. The role play has been overflowing with bubble wrap for their cosy igloo. They even had the binoculars out to spot those polar bears from afar. In the Green Room, they created lovely artworks with paint popsicles. Brrrr…. As there’s probably not much else to do on the wintery plains other than bear spotting and a bit of ice fishing, the Gibbons have struck up a chord with their instruments this week and practiced following patterns and instructions like stop and go. Speaking of stop and go, they’ve been working up a sweat in the garden as they manoevered through their obstacle course, jumping in and out of hoops and running around cones. Their cooking activity, which divided our tastes, was apple and cinnamon baked oatmeal bites. Some loved it, some hated it, but all enjoyed the process of measuring out their ingredients and stirring up a storm.

Oh we do love to be beside the seaside and the Baboons have been celebrating the sea in this week’s batch of activities. All manner of crustaceans and cephalopod molluscs have washed up on the Baboon shore. The children have made paper plate jellyfish and seahorses, handprint crabs, and empty tube octopuses. Their story focus was Shark in the Dark as they repeated familiar phrases and anticipated what was coming next. On their tablet, they observed deep sea diving videos, identifying the various colours and types of marine life and what nooks and crevices they pop out from. In the role play area, they’ve all taken a trip out to sea in their boat, lookingout for all their favourite sea creatures. In the dance room, the Baboons met Popcorn the Dolphin for their yoga story. Now is the time when I would end this little blurb with a dolphin noise, but I really don’t know how to spell that sound.

The Jurassic age has stomped back in full effect this week as the Gorillas have been exploring the wonderful world of dinosaurs. In the small world area, the Gorillas have been searching high and low for dinosaurs hiding in the sand and using the tape measure to determine which was the tallest or smallest. For their group time activity, the children worked together to create mind maps of their ideas about their favourite dinosaurs from tyrannosaurus rex to triceratops. The Gorillas have also taken a renewed interest in our oversized dinosaur book which includes comparative images of dinosaurs and humans. So the children have gained a better understanding of just how big dinosaurs would be next to us. It’s not all been dinosaurs though as the Gorillas have also been taking their cars for tune-ups and services in their role play garage. They have also been focused on adding one more of something for their maths focus and becoming familiar with the letter “L.”