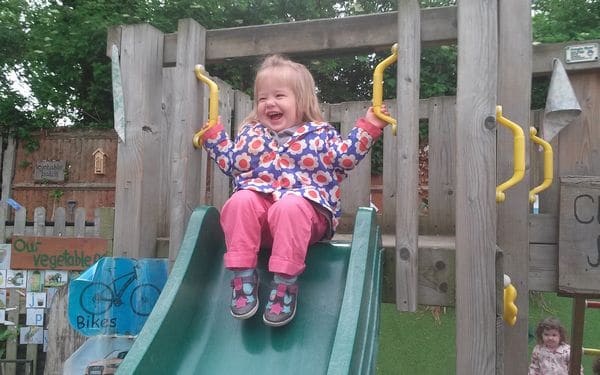 This week our Chimps have been marvelling at giant bubbles. They also had different coloured bags with matching coloured objects and they were really interested in picking out the objects and examining them – handing them to each other to investigate further. They did white hand painting for optimum effect on black paper and they loved painting their hands and watching the effects. They made cards for the children that have been moving onto the Howlers to let them know they will miss them. They made towers bigger than themselves in the garden and they had a tent inside which they did all sorts of different activities in all week. They had lots of different sized and shaped cars out in the sand, making different tracks and patterns. Then they scattered the sand on the floor next to the tray and made longer marks – they were fascinated by this, it was lovely. They covered big areas of tin foil with shaving foam meaning them to swirl it around but our particular customers that day were quite fussy about getting their hands messy and so they were given implements like straws and spoons instead! They had a lovely teddy bear’s picnic under their tent and the teddies were given tea and cake and fruit – lucky them. The team filled tissue boxes with ‘treasure’ and the babies loved putting their hands in and bringing the surprise objects out. The Chimps have been practising climbing up the hill at the back of the garden to get toys waiting at the top and they were really proud when they reached them. They did a texture/noise experience where they ripped and squashed the foil and listened closed to their ears.

Our Howlers were really enjoying ‘The Hungry Caterpillar’ this week and they read lots of other stories with puppets as props. They counted the pieces of fruit and talked about the fruit they could see. They looked at photographs of dandelions and talked about their features – then the team provided them with the correct colour paint and forks and they made prints that looked like the flowers. Educational and pretty. They continued with their travel agents which they really enjoyed last week – they have been looking at lovely pictures of all over the world and chattering away on the telephones. They did a popping balloon game (not for the faint-hearted) and donned wellies to stamp on different balloons after choosing the colour they wanted to destroy! They had a lovely Heuristic Play session and made impressive structures out of octagons. The team made ‘Rainbow Soap Foam’ and the Howlers loved scooping the different coloured foam and placing and squashing it onto colourful plates. They used colourful tissue paper shapes to decorate toilet rolls and then pretended they were torches and they played with their old favourite the water beads – they really love pouring them from one container to another, looking at the colours and feeling their jelly-like texture.

The Baboons this week have been making some rather lovely stone animals made out of beach stones. They were really excited by these and were proud as punch when they were lined up in a row! In their small world department they had the farm and farm animals and they made up little farm stories and looked after the animals. They looked after each other in their doctor’s surgery and they did a relay race in the garden. They made ‘bubble snakes’ and they did amazing waiting and turn taking playing their marble game. They mixed paint and spaghetti and loved the feel of it as they squidged it around – each to their own! They had a fabulous ‘dinosaur land’ and got really engaged in intricate small world scenarios as they joined it with the farm, making the dinosaurs eat the farm animals and run and chase each other. They made letters and other marks in wet sand with sticks and other implements and they made houses for little people and animals with Lego. They did lots of Makaton at group times and made animal noises as well as listening to animal noises on the speaker and guessing what they were.

With a few babies in our families being born soon or recently the Gorillas decided to have group time discussions about younger siblings and how to look after/treat them. They talked about the siblings they have and what they drink and eat and how they are kind to them – sweet. They had a role play beach with a sand area and shells, spades and buckets etc. to get them into the summer spirit. With this as ever came the learning of lots of new related vocabulary and knowledge. They did some lovely printing with the feet of small world animals and they worked as a team to make the marble run and take turns in using it. They made space ships with Stickle bricks and they practised letters by typing on the computer. The dinosaurs invaded the doll’s house this week to create some dramatic role playing and they did more imaginative play by making up their own stories and acting them out in small groups. They copied patterns with the little colourful pegs on the peg boards and their observational skills were brilliant. They drummed in the garden with our coloured plastic tubes and they did some lovely group time singing in the dappled sunshine on the hill at the back. They watered and looked after the vegetable patch all week, as did the other groups too – and they had a visit/singing and music session with our very lovely mum Gill Dazely – Opera singer. It was a totally brilliant half an hour and the children were enchanted. Please look out for our videos on the parent portal later on so you can see for yourselves.