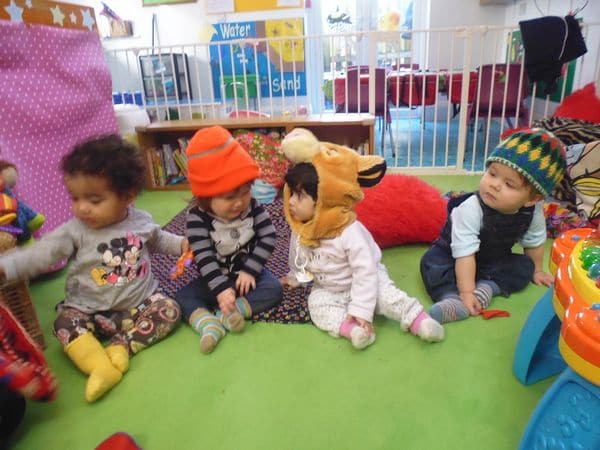 Our little Chimps made some delicious pepper parcels this week. They were smelling and tasting and rolling and having a lovely sensory time. The team in the Chimp room have been adding lots of different textured bits and bobs to their sensory board and our collection of rather sweet babies have been transfixed by it this week – feeling the different sections and learning all the time. They also played with their ’emotions bag’ with pictures of babies with different facial expressions – the girls were acting out the facial expressions and talking to them about what they mean. They had lots of fun hiding toy animals in the sand and finding them again and making the animal noises as they did it. They also made some very cute cotton wool bunnies and tried on lots of hats and looked at themselves in the mirrors. They did more hiding and seeking with toys in, on top of and behind different sized boxes and played peekaboo – this made them giggle a lot.

Our fabulous Howlers had a really exciting time with our light box this week. They got it out a few times in the dark and delighted in the light effects inside to the backdrop of moody space music. They made their very own dolls house with Sophie on Friday and will no doubt be decking it out with people and furniture and playing with it all of next week. They had the hospital and patients, beds, ambulance and even air ambulance out for their small world experience this week and their water tray was full of sand and hidden dinasoars. There was a lot of roaring going on all week as you can well imagine. They learnt lots of different yoga stretches in music and movement and played with our collection of different sensory balls. They even found time to make their own playdough and use it to create and learn all about different shapes.

The Baboons made their very own marble run out of paper plates this week in their own innovative way. They also played all week with the car collection and garages. They too played with sand this week but used it to draw different letters – on their own and copying adults and images and they did really well – clever things. They did lots of different action songs and some messy shaving foam painting. They loved painting with shaving foam because it feels so soft and smooth on their hands (their was a lot of smoothing it all up their arms just as you would expect). They giggled a lot as they read ‘Dinasoars Love Underpants’ and remembered the rhyming words. They continue to enjoy going out to the outside classroom and this week they were doing lots of drawing on the chalk boards and playing with building bricks.

Our big Gorillas have had a very busy week too. Their role play was a brilliant and spacious building site. Complete with giant bricks, hard hats and tools they built all sorts of life size constructions and learned lots of vocabulary all about building and making. They also had small world full of diggers and wood so they could act out smaller scenes along the same lines. They did lots of excercise this week with a series of high energy musical ‘jumping workouts’. They loved these. They had cornflour with different colours and different things to swirl it around with in their water tray. They did some really careful and clever house collages where they named the rooms and the different objects you would find in there. They read and shouted out the words to ‘The Smartest Giant in Town’ story which they all know and love. Then of course they had their brilliant Italian lessons. They learned lots of new words and old ones that they are repeating all the time and they sung some Italian songs. Irene is away for a month so Maria will be taking over the lessons – don’t worry they won’t stop the children are enjoying them so much I don’t think they would let us!

Oh, just a quick note we are starting to collect Sainsburies vouchers so we will put boxes in the different entrances. Please please support us and the cause by collecting as many as you possibly can so we can get some really brilliant things for your children to play with. Thank you! Have a great weekend all.