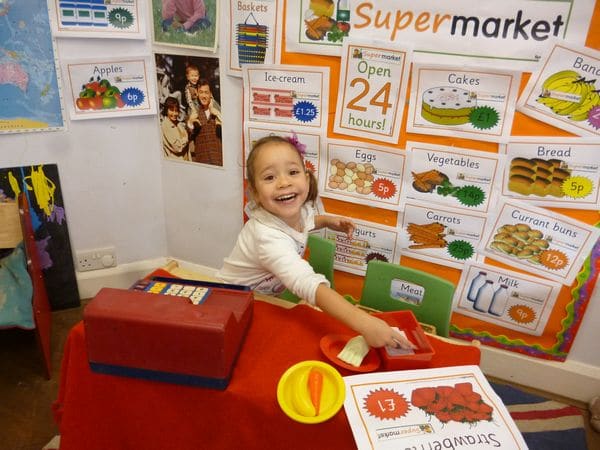 This week the cheerful chimps have been having a lovely picnic with lots of teddy bears and encouraging them to sign ‘more’, ‘please’ and ‘thank you’. They have been using their strong muscles to pull off the hard and soft objects from their interactive board. All the Chimps have enjoyed splashing away in the water which has insects (not real) in it and getting used to floating and sinking objects. In creative play they have been gluing, sticking and painting on different shapes to create mobiles for their ‘dangly den’ next week.

This week the Howlers having great time ribbon dancing to all different songs and sounds during music and movement time, they have also been making their very own ‘fossils’ by printing with dinosaurs in play dough – and yes of course they understood! |They took these home to show their families their ‘amazing discoveries’. The Howlers are still enjoying their shadow puppet theatre, which they have been doing on and off for the last few weeks (I always know when they are using it as my office lamp disappears!). This week they had a fantastic dinosaur story with lights and sounds which was very exciting for them. They have been learning how to bath babies in the water tray and keeping them very clean and dry them properly and received a special new dolls house as a gift from Joash’s family and they are absolutely loving playing with it (Thank you Libby)’

The Baboons have had a book themed week – they have just loved Dr. Zeus’s ‘Green Eggs and Ham’ and have been watching an animated version on the Ipad and have got to know lots of the words – there’s even been a bit of singing. The Baboons have also been practicing their hand-eye coordination skills with educational Ipad games – moving balls of string around and getting marbles out of a maze. There have been some amazing building skills on displays as the Baboons have been working together to build block cities. Their cooking activity this week was, of course, green eggs and ham. They mashed, poured and squeezed their eggs to make their eggs and white and when it came to the eating ended up doing a lot of scooping because our Baboons weren’t over keen on their green eggs. To be fair they were impressive but not that tasty-looking. In the outside classroom they have been making ‘spaghetti towers’ with playdough and threading beads and completing geometric puzzles.

The gorillas this week have made their very own supermarket and have been role playing selling all sorts of foods to each other, weighing it out, pricing it up and talking about different produce. They have also been learning about and painting different facial expressions whilst looking in the mirror, at pictures and each other. They then shared them at group time and discussed how they were each feeling and why. During music and movement they learnt some ballet moves and lots of new yoga and ballet stretches. In the garden they made their own relay races using cones and hoops to run round and jump in and out of – they let off lots of steam, kept warm and had lots of fun.